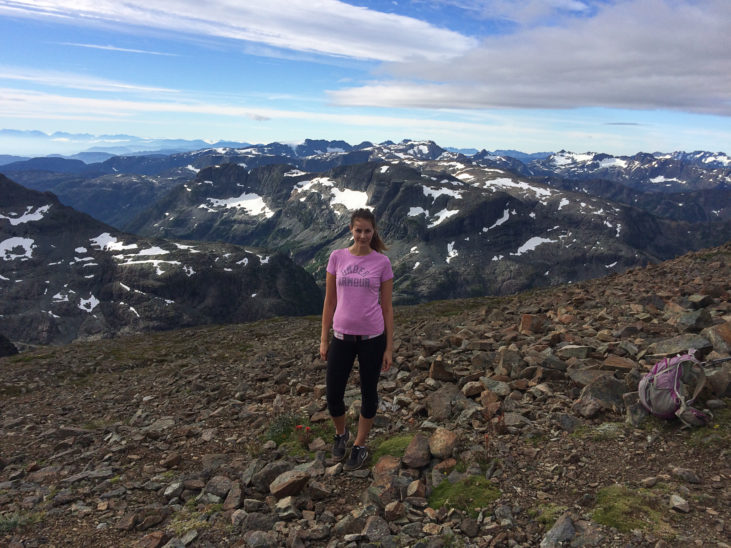 This is a very long overdue post about our hike up Mount Albert Edward this past summer and also an explanation as to why I fell off the blogging band wagon! I got completely hooked on endurance hiking and fitness this summer and spent most of my free time training. It had been a goal of mine to complete this hike for years. We kept planning to do it and then something would come up or the weather would turn and we would end up having to cancel. This year we finally did it and I’m so glad! I think I had built the hike up in my head to be harder than it actually was so it was a relief to get over that mental block. You can see Mount Albert Edward in the distance in the picture below. 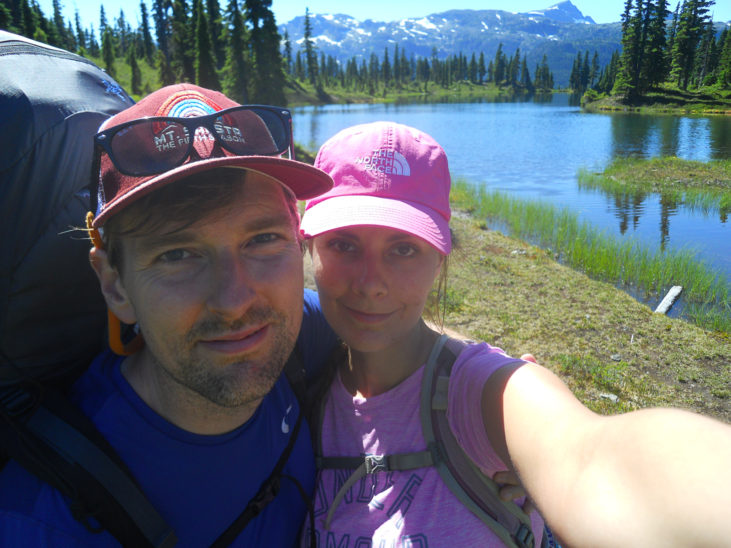 On the first day we hiked to Circlet Lake, which is about 10 km in from the parking lot depending on which route you take. Jonathan had warned me that Circlet Lake can get pretty busy during the summer months (thus earning it the nickname Circus Lake) but I don’t think either of us were expecting it to be quite as busy as it was. At the very least it made for a cozy night as we set up our tent a few feet from our neighbors in the overflow camping area. 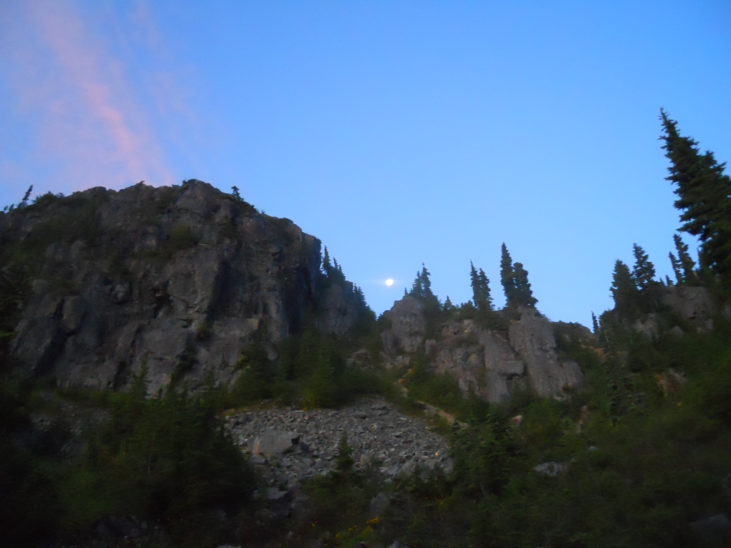 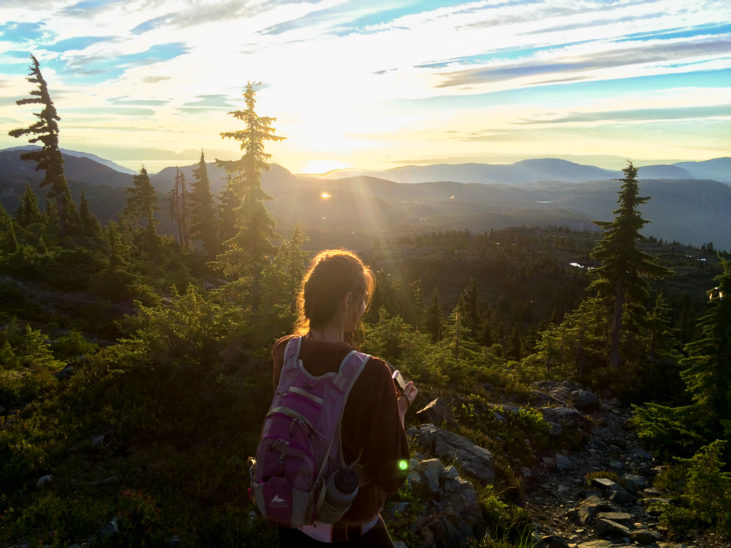 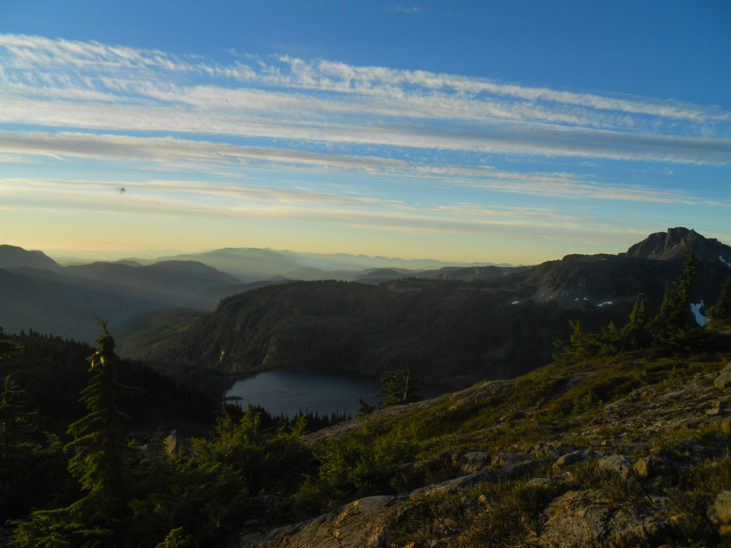 The next morning our alarm woke us up at 4 am. Jonathan got up first to collect our things from the bear cache while I stayed in my warm sleeping bag. As I lay there listening to the wind softly rustling in the pine trees outside the tent I toyed with the idea of rolling over and going back to sleep and calling off the whole hike. However moments later Jonathan was back outside the tent boiling water to make coffee. I had brought Starbucks instant hazelnut lattes for a morning treat and it was the perfect way to start our hike. We set off on the trail by the light of our headlamps and were making our way up the steepest part of the hike as the sun started to come up. I’m not going to lie-there is one spot on this part of the trail where you have to sort of scramble along some loose rock and climb up an especially steep section. You can see this spot in the pictures above. It’s not even as bad as it looks and certainly no technical climbing is involved but I did have a very brief meltdown and cry while clinging to the side of the rock. Jonathan talked me through my freak out and before I could wail “get a chopper!” that section of the trail was over. 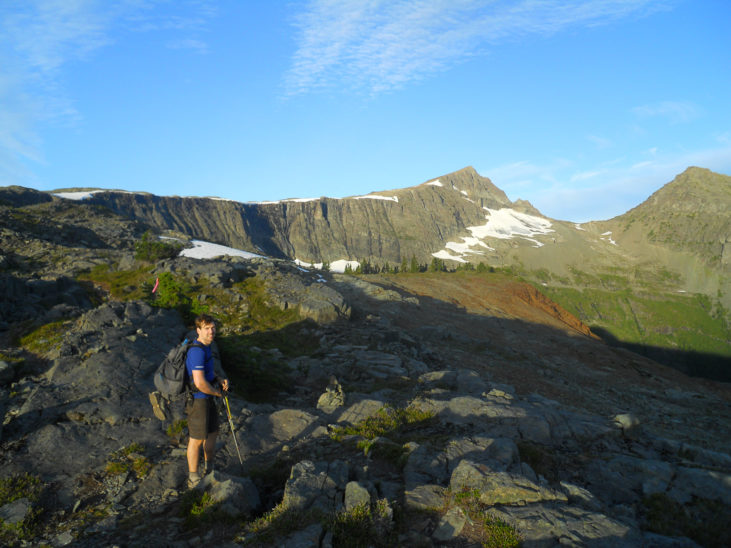 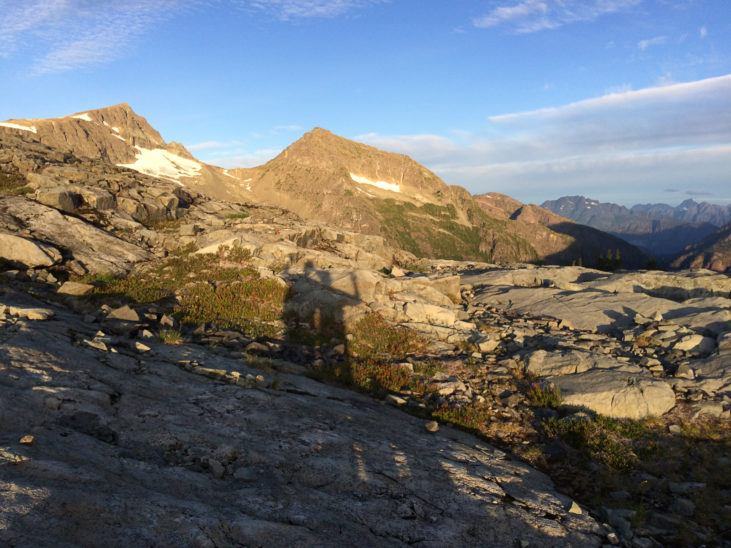 My dignity somewhat intact, we began making our way along the ridge toward the summit. Far off in the distance we could see one other person ahead of us but other than that it was like we had the mountain to ourselves. We enjoyed the most beautiful and quiet sunrise from the ridge taking in the stunning view of peaks, mountain lakes, and miles and miles of trees. We’d been going at a fairly leisurely pace at this point just taking in the silence and the sunrise. However, as soon as the sun was up and it got a few degrees warmer we suddenly found ourselves swarmed by mosquito’s and lo and behold, it got a little easier for us to pick up the pace!

After a certain point there isn’t really a defined trail. You just make your way along the rocky route towards the summit. It kind of feels like walking on the moon. The last few hundred meters heading up to the summit are very steep and quite slippery with loose rocks. 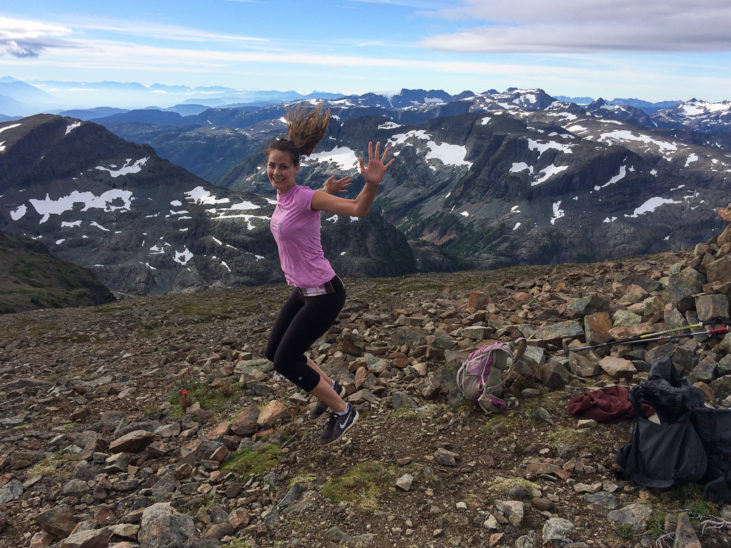 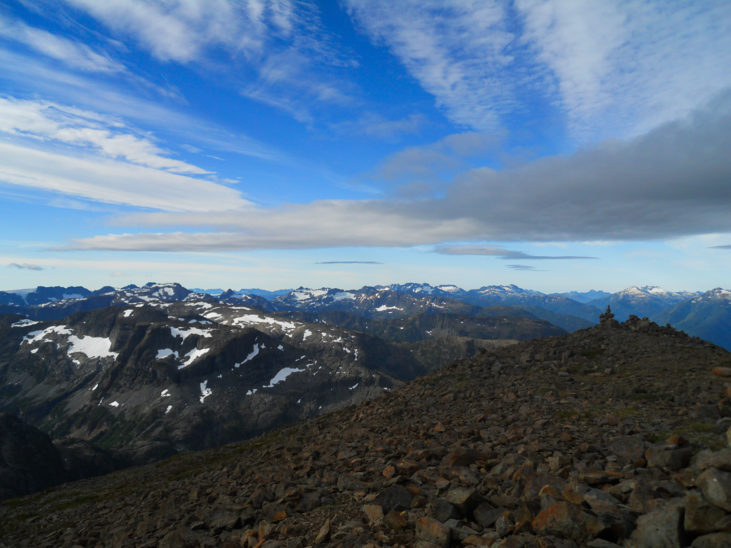 We made it to the summit just before 8 am and took a little break there to celebrate. Unfortunately, the pictures just don’t do the view justice. All around we were surrounded by snow covered peaks and sky. Standing there with Jonathan really helped me to understand the appeal of mountaineering. Not that hiking Albert Edward in the summertime is anywhere near mountaineering but I’m pretty sure it’s as close as I will ever come to it. We filled out the summit register (my first ever!), took a few selfies, and then it was time to head back down to pack up our camp at Circlet Lake. 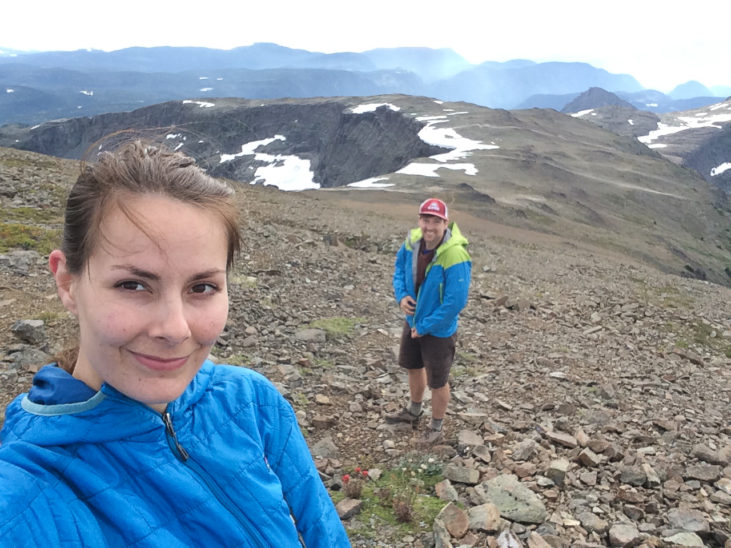 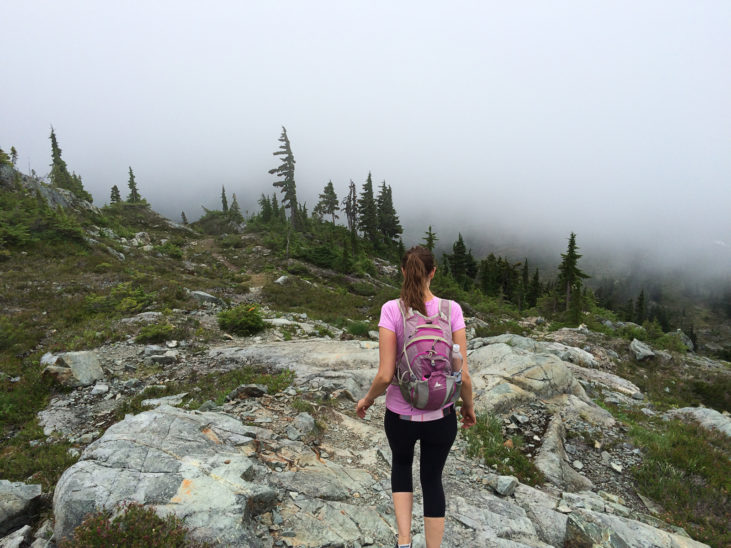 The plan was to camp that night at Kwai Lake. We arrived at about 4, set up camp and climbed into the tent for a nap. After waking up refreshed we decided we could probably hike out to the parking lot before dark if we hurried. This would make for a long day of hiking, about 23 kms, but we felt up to the task and I wanted to push myself to see if I could do it. So we packed up camp as quickly as we could and hustled out to the car. We were the last ones off the trail by a long shot that day which once again felt like we had the park to ourselves. We arrived at the parking lot just as it was getting dark. I paused to take a picture of Albert Edward way off in the distance. 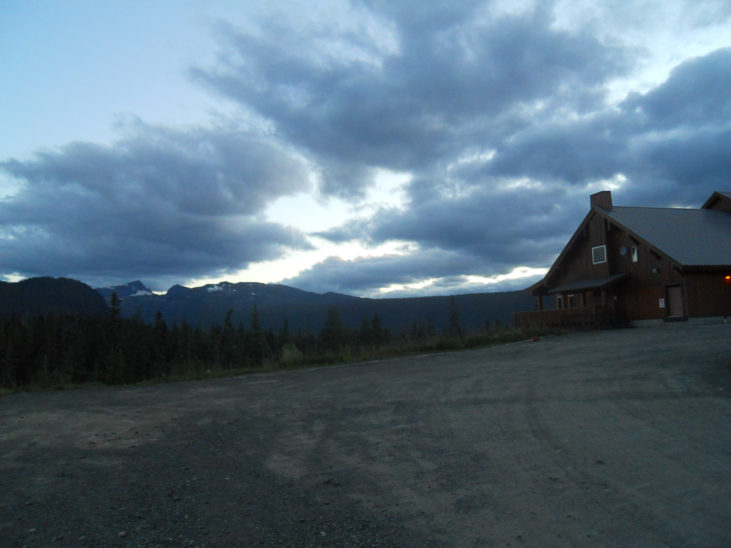 On our way home we stopped for a massive meal of fast food. I think we must have looked crazy limping into pizza hut caked in dirt and shivering under big athletic puffer jackets. I think the guy working there thought we were on something because we were acting super awkward due to sheer exhaustion and an overwhelming need for lots of pizza.

This hike got me kind of hooked on the idea of “ultra hiking” and I made us spend every weekend for the rest of the summer on massive all day hikes trying to break 30 km. My goal for next summer is to hike the Castlecrag-Mt Frink loop trail in Paradise Meadows.

Thanks for reading! Let me know in the comments below-do you have a goal that’s taken you years to complete? Or one you haven’t completed yet?