A few years ago Jonathan and I visited the Grand Canyon on a road trip through the Southwestern United States. We only spent one night there but it was enough to make us fall in love with the place and we decided we needed to go back-this time to hike across it! This trip took more planning and preparation than any holiday I’ve ever been on, but it was well worth the effort. The total distance is a little over 33 km with 1780 m in elevation gain-my poor legs! 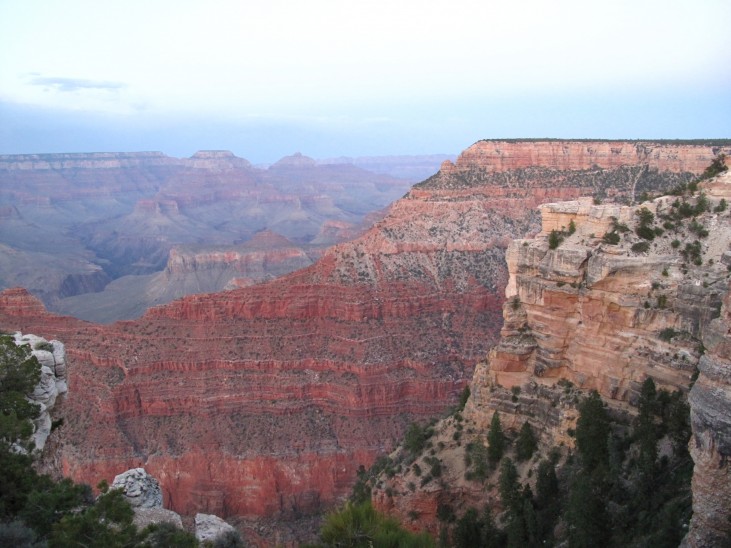 We decided to descend from the South Rim and ascend the North Rim trail because the South Kaibab trail is known for offering little shade and no opportunities to refill water. It also provides some of the most spectacular views so it’s nice to have the canyon in front of you as you descend. 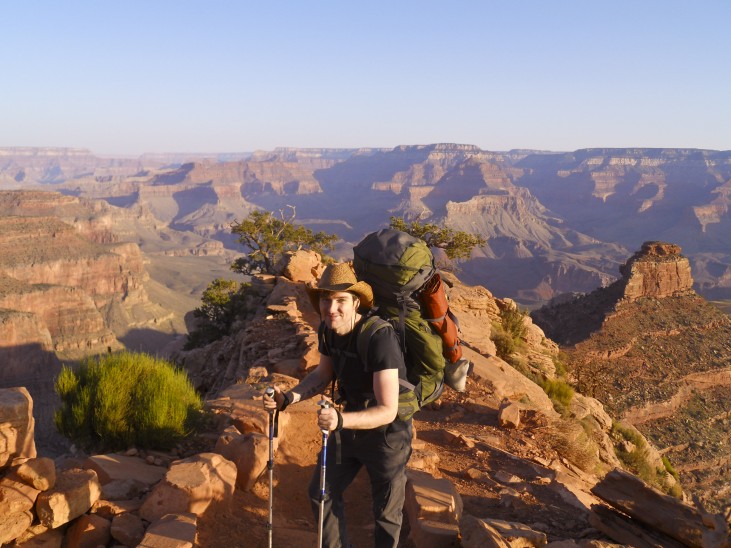 We started at 4 am in an effort to reach Phantom Ranch camp by 10 am to wait out the mid day heat. Hiking down the South Kaibab trail as the sun came up was nothing short of amazing. It seemed like every turn revealed a new view of the canyon. You really can’t tell how much there is to it when you’re standing at the top of the canyon looking down. 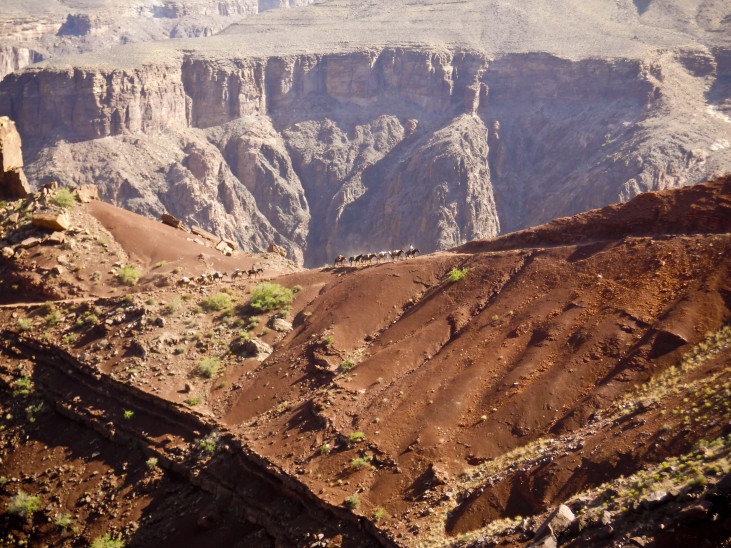 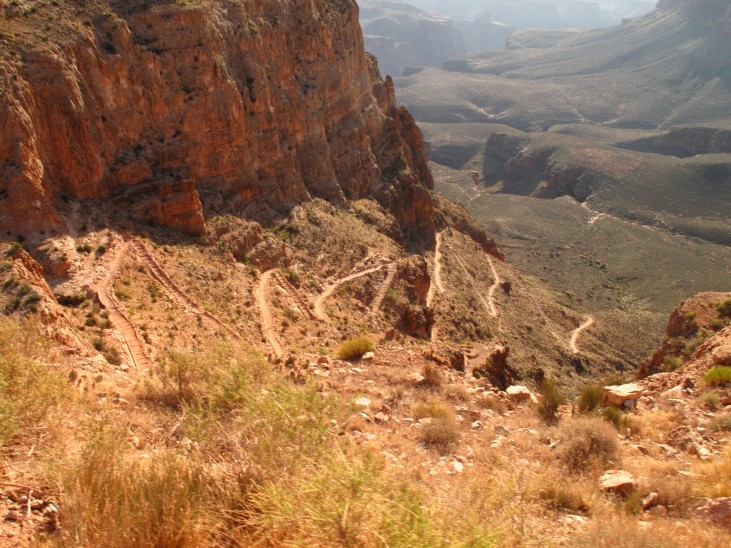 We arrived at Phantom Ranch camp on schedule. We were covered in red dust from the trail and exhausted from navigating the steep switch backs. It was already over 100 Fahrenheit and I was about ready to melt. Phantom Ranch camp was built in 1922. It consists of several cabins, a restaurant, a ranger station, and facilities for the mules that run tourists and supplies up the trail. It is located in the bottom of the canyon on the north side of the Colorado River. We spent the afternoon there snoozing in the shade, chatting to other hikers, and hanging out in the air conditioned canteen. 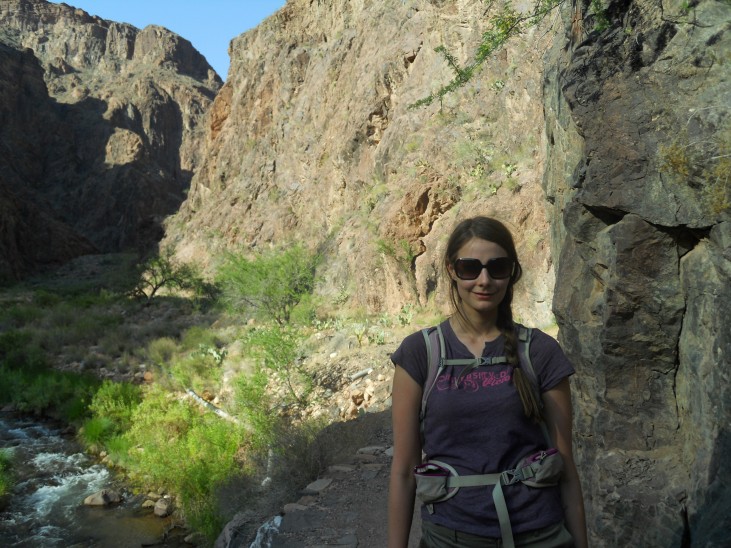 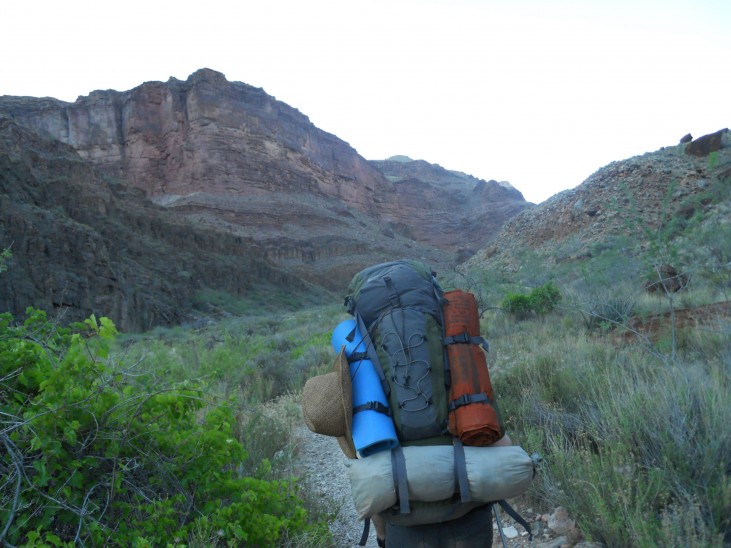 We left Phantom Ranch around 5 and started the next leg of our journey. This part of the hike couldn’t have been more different from the South Kaibab trail. The 11 km hike from Phantom Ranch to Cottonwood camp takes you through a secondary canyon within the Grand Canyon. It is recommended that this trail be avoided during the afternoon as the canyon walls absorb and throw off heat. Even as the sun was sinking below the canyon walls we could still feel the heat coming off the red rock. This part of the trail feels really peaceful. It follows the Bright Angel River which sustains a lot of the Canyon’s wildlife. We passed deer, chipmunks, and a beaver but saw very few people on this trail.

We were about 40 minutes away from Cottonwood camp when we encountered a rattlesnake on the side of the trail. I guess we startled it pretty good because it rattled and hissed and coiled up for a few minutes before making its way off the trail and into the brush beside it. Being from the Pacific Northwest we’ve never encountered a snake larger than a friendly little Garter snake and it scared us both quite a bit. 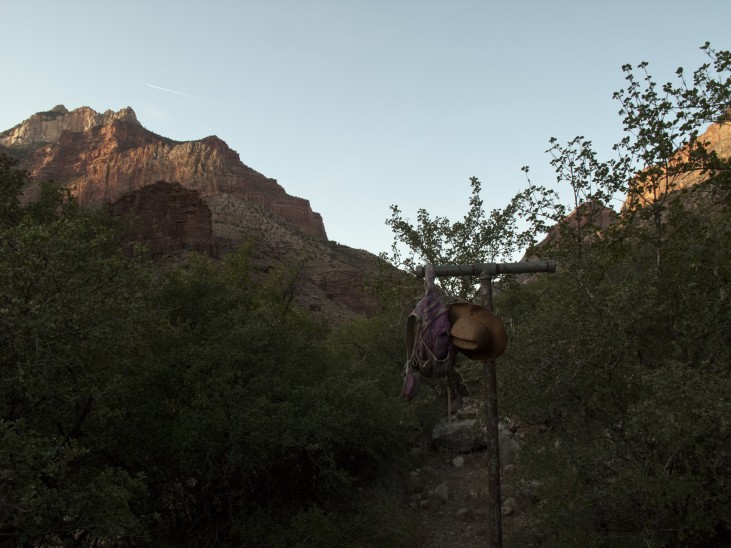 Having survived the rattle snake run in, we hustled to camp pretty quickly and arrived shortly after dark. Jonathan set up our tent and we took one last look at the stars scattered across the sky and climbed in for the night. All night there was the most heavenly breeze rustling in the leaves outside and we felt about a million miles away from the rest of the world.